In April 1897, the first unofficial Episcopal service in the Stroudsburg area was held by a small group gathered to celebrate Palm Sunday in the living room of an East Stroudsburg residence.  Presiding was an Episcopal nun.  In June 1898 the church, officially organized as Christ Church, was received into the Diocese of Central Pennsylvania.  (Later, the church was incorporated into the Diocese of Bethlehem.)

On May 2, 1902 the lot where the church stands today was purchased for $725; and in December 1903, the bishop sent Archdeacon R. S. Radcliffe, General Missionary of the Diocese, to serve as Priest in Charge.  On June 8, 1904, the cornerstone of the current building was laid, and by September the construction was completed at a total cost of $7,559.91.  On November 21, 1905, the church was consecrated. 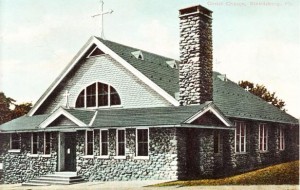 In September 1927, the Reverend Thomas Shoesmith began his 29-year tenure as rector.  Father Shoesmith brought the church through some difficult times, including the Great Depression; yet, parishioners later remembered not the hardships of that time, but the joy of working together. An important part of church life at this time was the St. Mary’s Guild of Women, who organized countless bake and rummage sales, fudge-making parties, and entertainments.

In the early 1930s, Robert E. Hilton, choirmaster from 1930 to 1952, instituted a sung Mass on Christmas Eve; this Christmas Vigil Service continues to this day. He also organized the first Acolytes’ Guild, which during the 1930s, had as many as a dozen boys serving at the 8:00 am and 11:00 am services.

There is a story that one Sunday Father Shoesmith’s mischievous young son, Thomas, stationed himself outside the church and announced to everyone that his father would not be holding services that morning. Inside the empty church a perplexed Father Shoesmith waited in vain for his faithful parishioners. What Father Shoesmith said to Thomas later has never been reported.

The Reverend Charles A. “Arch” Park followed Father Shoesmith in 1956 and was rector for nearly 30 years.  Under Father Park’s supervision and encouragement, plans were made for major renovations to the church, and an amount of $83,218 was pledged, exceeding the goal of $75,000—an extraordinary achievement.  Work began on Easter Monday 1959, and it was at this time that the narthex was extended and its covered entrance porch added, as well as the offices, robing room, and sacristy, with their cloistered walkway from the street.  There were also many improvements to the basement and the fabric of the whole building. The newly renovated church was rededicated by Bishop Frederick Warnecke on September 29, 1959.

In the years following this work, the new pipe organ was installed (1969), as well as the memorial stained glass windows (1973 onward). Father Park introduced the parishioners to a variety of modern and ancient rituals, and began several traditions that have continued, including the Christmas pageant and family Eucharist, the Easter Vigil, and special Maundy Thursday services. It was under Father Park, soon before he left, that the first girl acolytes began serving alongside the boys.

In November 1980, Christ Church celebrated the 75th anniversary of its consecration with an ecumenical evening prayer service; a number of local clergy participated, and Lawrence Whittemore Jr., dean of the Cathedral Church of the Nativity, Bethlehem, delivered the sermon.

Father Park took a sabbatical in June 1985 and then entered retirement. When he died in 1997, a memorial service was held in Christ Church for this well-loved and influential rector.

After a series of interim priests, Father Michael Newman was called in October 1986. Under Father Mike’s leadership, with his warm and vibrant personality, the parish began to grow. There was active and enthusiastic participation in the Sunday School and Youth Group, there were two weekly Bible studies, and the Good News Chapter of the Order of Saint Luke was formed. Father Mike introduced several social events to enhance fellowship and the first of our annual vestry retreats was held in 1989. Various repairs and improvements were made to the church, including the installation of the columbarium. At the time of Father Mike’s departure after five years with us, attendance at the Sunday services had more than doubled, and parish membership had increased by approximately 25 families.

In the fall of 1992, the Rev. Elizabeth “Penny” Moulton joined Christ Church as the first official female rector. Her easy manner and comfortable style made her very popular with parishioners, especially young members. Bible Study and small groups continued to be an important part of the church, and a small band of “regulars” attended the intimate Eucharists on Wednesdays and Saturdays.

At the end of 1994, a huge fund-raising effort began for renovation of the undercroft.  $39,000 was borrowed from the Diocese, and pledges were made to repay it over three to five years.  The total cost of the work was $47,916.50; parishioners raised the money for the difference and then repaid the loan entirely by early 1998.

Under Rev. Penny’s leadership, the number of registered Sunday School families swelled to 60, and more than 35 children attended regularly. Rev. Penny also introduced Taizé-style worship, a peaceful service of quiet prayer and simple song inspired by the Taizé community in France. Held one Friday every month, it was enjoyed by a small but loyal group, and Taizé songs were used in regular church services on several occasions by the Bell Choir and the Choir. During Rev. Penny’s tenure, the church’s tradition of community participation continued, with support for Pocono Area Transitional Housing, Habitat for Humanity, and outreach to needy children.

In 1997, the church’s 100th anniversary, celebrations began on Palm Sunday. The recently elected Bishop of Bethlehem, Paul Marshall, was with us for the 10:00 am service, at which he confirmed five members and received five others.

In early June, the church looked back to its origins with a service using the 1892 prayer book.  Later that month there was a strawberry festival with desserts, games, and a concert by the Trinity Episcopal Church Centennial Band. Another historically oriented service using the 1928 Prayer Book was held in September, and concluding the year-long festivities was a luncheon on the first Sunday of May 1998.

On November 23, 1997, Rev. Penny resigned as rector, and a luncheon was held for her and her husband Jack to recognize their many contributions to the parish and to wish them well in their future endeavors.

The vestry began the task of preparing for a new search. Father Joseph De Acetis began serving as interim rector soon after Rev. Penny’s departure; he and his wife Joan were very well-received. His interesting background, warmth, and sincerity made him very popular with parishioners, and their wish that he could remain was often expressed.  The congregation’s prayers were answered when Bishop Paul Marshall announced in March 1998 that Father Joe would be appointed as “Priest in Charge”.  He was officially installed as such by the Bishop on November 14, 1998.

During their time with us, Father Joe and his wife Joan made a great difference to Christ Church with their faith and energy. They revived the youth group, conducted regular and well-attended Bible studies and adult forums, and encouraged many new initiatives.

Father Joe retired in August of 2000, leaving a revitalized church with a growing membership, and, for the first time in many years, enough money to cover expenses and then make sizable donations to the needy in our community and the world.  It’s a church which has been, and still is, undergoing a spiritual awakening.

Christ Church also began major renovations and expansions to the building during Pastor Beth’s tenure. A committee was formed to oversee the renovation of the office wing, which was completed December 2008.  A fundraising campaign was initiated under the guidance of the professional fund raising firm of Kirby Smith, Inc. The initial campaign raised $280,000 in pledges.  At this stage, the late Dr. Henry Jordan challenged the parish to raise an additional $100,000, which he would match. Parishioners rose to the challenge and the additional funds made it possible to add the second floor to the office wing. The final renovations were completed in 2012. 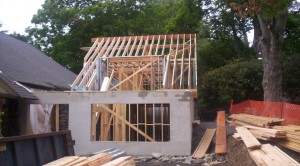 In December 2009, Pastor Beth announced her retirement effective February 14, 2010. Because of Pastor Beth’s warmth, approachability, and commitment to inclusiveness, we were deeply saddened by her departure.  The Rev. Dr. Gerard Gaeta served as Interim Rector after Pastor Beth.  During Fr. Gaeta’s time with us, he revitalized the Adult Forum for Bible study and discussion and formed an Interim Task Group to assist him in assessing key issues of the Congregation’s life and ministry.

In November 2011, Christ Church welcomed our most recent rector, the Reverend J. Douglas Moyer (“Father Doug”). Fr. Doug retired this past year; we are currently seeking God’s choice for our new rector at CEC, while Mo. Sidnie White Crawford serves us as assisting priest.